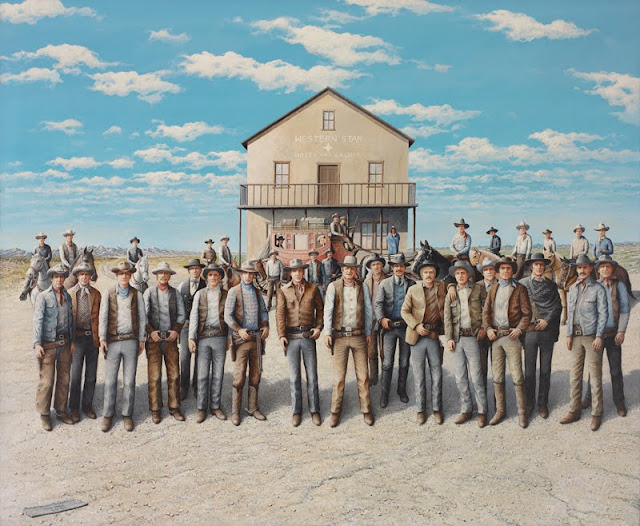 The names of the various figures in the painting will appear when the cursor is passed over them. Click the name to link to the corresponding Wikipedia page.  Click here to see a larger version of the painting.

'Western Star' was painted by Ralph Schofield in 1981 as a tribute to Western movies and the actors who starred in them. The painting includes likenesses of 36 actors known for their roles in Western films. From Tom Mix, Hollywood's first silent Western megastar who helped create the genre beginning in the first decade of the 20th century, to Robert Redford, Paul Newman, Jack Nicholson and Clint Eastwood, who were in their 40's and 50's at the time 'Western Star' was executed.

Schofield included one woman (Mae West, seated in the stagecoach) and one figure representing a Native American actor (standing on the porch) in the painting. He also painted himself, riding shotgun on the stagecoach.

The original painting measures 40 x 48 inches and is painted in acrylic on canvas.

PLEASE CLICK ON THE OTHER PAGES (ABOVE) TO LEARN MORE ABOUT RALPH AND 'WESTERN STAR.'